skip to main | skip to sidebar

The first time I heard a song from Dutch singer/songwriter Herman Erbé was 29 years ago, give or take a few weeks. It happened in Café Husse, a tiny "bruin café" in Langestraat which was to become my local pub for many years. Until it closed, that is.

Karin, who at the time was already living in Amsterdam, had heard Herman sing in Folk Fairport, found out he co-owned a pub and during one of my visits to the city carted me there on the back of her bicycle.

This was a few years before Herman joined Jozef Custers to form Circus Custers, a band which scored a couple of top-40 hits ("Verliefd", "Monica", "Louise") in the early Eighties. But like in so many cases, such hits don't say everything about the music that bands or singer/songwriters normally make. 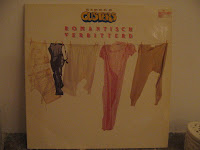 Their album "Romantisch Verbitterd"(1983) contained a few of the songs I have always loved, such as "Wilde Ganzen", "Kop in de Wind" of "Het Allerschoonste Stoepie" but there were others: the one about the pensioner who'd never loved fishing but still went out every day to the canal to not get on the nerves of his wife ("Vissen"), the one about whether the Russians would really invade Western Europe and if so, why and where they'd come from ("Als de Russen komen"), or about Dutch participation in UNIFIL, the UN troops in Lebanon in the 1980's ("Net 3 dagen Libanon"). Herman has also written many songs for kids - yet another side to his creativity.

Sometimes I search the internet for people I used to know (better) - and some months ago I found some new songs by Herman Erbé on YouTube.

"Je hebt geluk gehad" is about a soldier returning from Afghanistan after the vehicle he was in hit a road mine, about his buddies, and about sense and nonsense of the mission. The song is powerful, like so many by Herman's hand, even more so in combination with the stills that make up the video put together by him and his partner Josje Hennink.

Anyway, since the song is in Dutch and many of you do not understand the language, I have tried to sort of translate the lyrics into English. Took me a while but that is the reason why I didn't post this earlier. By the way, you can't sing my English version (totally unofficial and unauthorised, all rights Herman Erbé), and it isn't always literal, but I do hope that, in combination with the music and the images, Herman's intentions do come across somewhat:

You're such a lucky man
by Herman Erbé

You left your buddies there, beside themselves,
cursing, searching where the road was mined.
For a week or two they'll drive more slowly,
until their fear wears out and hides again.
Some want to but can't talk about it,
anothers feels as if his head explodes.
They fought the flames, fought for your limbs,
and then puked their hearts and bowls right out.

You left your buddies and your limbs behind.
Somewhat confused, a little aghast.
Those doubts, already in your mind implanted,
did grow when you woke up in that bed.
Bags of mail arrived with sympathy, good wishes,
love yous, be strong and get wells.
They're all such really nice people,
but you do change a bit with such a blow.

It was to be a peace mission, no eye-for-an-eye war,
a certain risk included - but noone prepared for this.
A mission for peace, The Hague had said.
Now that you're back, they're somewhat embarrassed,
you might even be the reason for a new debate.
You're such a lucky man.

Some of your buddies keep reliving their fear,
And in their eyes, madness fights pain.
Otherwise healthy, for the rest of their lives,
No such luck to just be shot or struck by a mine.
Their jokes extreme, sometimes real morbid,
worked up, often too high-strung.
They call you a "cuddly invalid",
looking at them you do feel fortunate...
You're such a lucky man.